Its common knowledge that solar PV module performance reduces as temperatures rise. It follows that rack-mounted above roof systems should out-perform in-roof systems, but by how much?

More and more customers want the reduction to energy bills that solar PV brings, but many aren't willing to compromise the looks (and re-sale value) of their home. In-roof systems offer an alternative that ticks the box on aesthetics for many people at a price they are willing to pay, but how big is the trade-off on energy yield?

Researchers at Viridian Solar in collaboration with the University of Cambridge Engineering Department and Enphase Energy have investigated and now the solar industry has a credible answer to this question.

ÐA review of the literature revealed little in the way of published work in this area,Ó commented Dr. KT Tan, Technical Director at Viridian Solar, ÐThe relationship between the operating temperature and power output of photovoltaic modules is well-understood, but not so the impact of different installation methods on operating temperature. We will be submitting a full paper outlining our results to a peer-reviewed journal and hope to be published later this year.Ó

The experimental results have been summarised in a new briefing document, . The group found that solar modules rack-mounted above a pitched roof would produce only 3% more energy yield than in-roof mounted Clearline PV modules over the course of 12 months of UK weather.

Stuart Elmes, CEO of Viridian Solar commented: ÐClearly, for some situations an extra 0.3% return on investment due to energy yield will matter, but for many customers minimising the visual impact on their building will be more important. As an industry at least we now have facts to present to potential customers so that they can make an educated choice.Ó 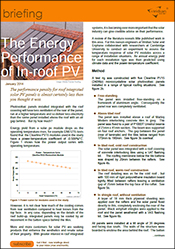