What's so Special about Scottish Roofs?

In contrast to England and Wales, where progress on low carbon building regulations has stalled, the Scottish Government introduced updated standards for new homes in 2015 that moved the bar significantly. Many in the industry expect a boom in the number of homes in Scotland built with solar. Not only will there be more solar homes, but the solar systems they are fitted with will be larger than the half kWp ´box-ticking? systems so often installed south of the border.

"When it comes to roof integrated solar, Scotland is special. Wind loads are significantly higher and building methods are different. Traditional slate roofs in Scotland are fixed above sarking boards and these are generally of lower thickness than roofing battens, which changes the pull-out resistance of solar fixings."

"MCS012 wind resistance ratings based on a standard roof build up are not applicable to Scottish slate roofs, and for this reason we decided to extend the MCS012 accreditation for our new roof integrated Clearline Fusion system. PV panels fixed with our special sarking brackets exceeded the capacity of the test rig at the laboratory, so we achieved the same maximum wind resistance rating as when our Fusion system is fixed to conventional roofs."

The slide below shows the wind resistance of three different roof integrated solar products (all with MCS012 accreditation). The range of Scottish wind loads are for two storey houses in Edinburgh (100m altitude) and Inverness (180m altitude), based on installation on duopitch and hip-end roofs. 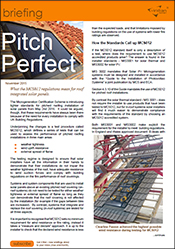 What the introduction of MCS012 means for solar installers. How the new requirements for wind uplift resistance, fire ratings and weathertightness impact roof integrated solar systems.