Chalet home in the Austrian Alps with Clearline fusion fitted

Viridian Solar's partnership with Krannich Solar, announced in March, is already opening new markets for its Clearline fusion roof integrated solar system. A number of systems have been sold in Germany and recently the first installation by an Austrian solar installer was completed by Sun4Energy Ecopower GmbH from Inzersdorf im Kremstal with installation training from Viridian Solar.

"One of the major advantages of the Clearline fusion solar panel roofing system from Viridian Solar is the simplicity of the installation. This saves a considerable amount of time. Another extremely important advantage is the high snow load of Clearline fusion. That is very important for a country like Austria. Integrated solar means that no extra weight is placed on the roof, but rather a lower one, because no other roofing material has to be applied behind the panels. This in combination with the high resistance to snow loads of the Clearline fusion roof solar panels offers an excellent solution for a country like Austria. "

"We are seeing an increasing interest in the Clearline fusion in-roof solar panel system in these countries. In Germany there is now an emerging replacement market, with old systems being replaced by newer systems, and German householders now seem to attach more value to the aesthetic aspects of the solar systems used. Also, thanks to the effective marketing by Krannich Solar Germany, we are delighted to see an increasing number of sales of our system for full roof integration of solar PV not only in Germany, but also in Austria. " 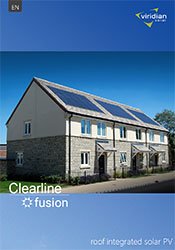 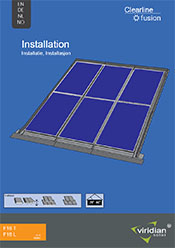