The ninth Solar Solutions International , the largest trade fair for solar energy in Northwestern Europe, took place from 12 to 14 April in the Expo Haarlemmermeer, near Amsterdam. Viridian Solar was present with its Clearline fusion in-roof solar panel system on the stands of distribution partners: HADEC Duurzame Energie , CCL Solar BV and Krannich Solar .

"Fantastic to win with the ArcBox! This started four years ago with an idea I took to Viridian Solar's headquarters to hear what my colleagues thought about it. It soon became clear that they also had a lot of faith in this and after a great deal of effort from the R&D team plus the necessary quality tests, this award-winning product emerged. I would also like to thank the entire Viridian Solar team. Well done!" 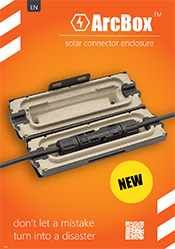