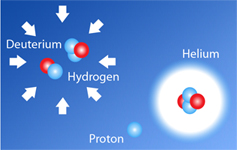 The sun is a blazing globe of incredibly hot gases fuelled by nuclear fusion - in the core of the sun small atoms are squeezed together at high temperature and immense pressure to combine into heavier atoms with the release of massive amounts of radiant energy. The gravitational forces from the mass of material in the sun and the pressure caused by the radiation blasting out in all directions are in balance (hydrostatic equilibrium). Gravity is pulling the gases to collapse inwards and radiation drives the atoms to stream away from the sun. In this way, the sun has remained a stable neighbour for 4 billion years and is expected to do so until the fuel for nuclear fusion diminishes to too low a level in 5 billion years time.

The energy from the fusion in the core works it's way out to the outer layers of the sun through successive absorption and reemission of radiation by the gas molecules. In contrast to the 8.3 minutes it takes light emitted at the surface of the sun to reach the Earth, these cycles of absorbtion and reemission mean the energy takes a tremendous time to travel out to the surface - estimates range from 10,000 to 170,000 years.

All bodies radiate energy on the electromagnetic spectrum. As the temperature of the body increases, the wavelength of the radiation changes with its peak occurring at lower and lower wavelengths. Bodies at typical temperatures on Earth radiate with a peak in the infra-red spectrum, but as you heat up a metal in a furnace it glows "red hot" then "white hot" because it is starting to emit radiation of shorter wavelength than infra red - radiation in the visible spectrum.

The surface of the Sun is at a temperature of around 5,500°C, and the diagram shows its emission spectrum  the energy emitted at each wavelength of radiation. The peak is in the visible spectrum, with components in the Ultraviolet and Infra-Red range.

Around 27% of the energy reaching the earth is reflected back into space or absorbed by the atmosphere. At a distance from the sun equal to Earth's average orbit distance the energy flux is 1,368W/m2, whereas around 1,000W/m2 reaches sea level when the sun is directly overhead. Gas molecules such as water and oxygen in the Earth´s atmosphere absorb certain wavelengths, causing so-called knock-out bands. The energy reaching sea level is shown in blue.

Despite our distance from the sun and the losses in the atmosphere, the sun continuously bathes the earth's surface with a staggering 90,000 TW of power, 6,000 times more power than the human race currently uses.