Tilt and Orientation and Solar Energy 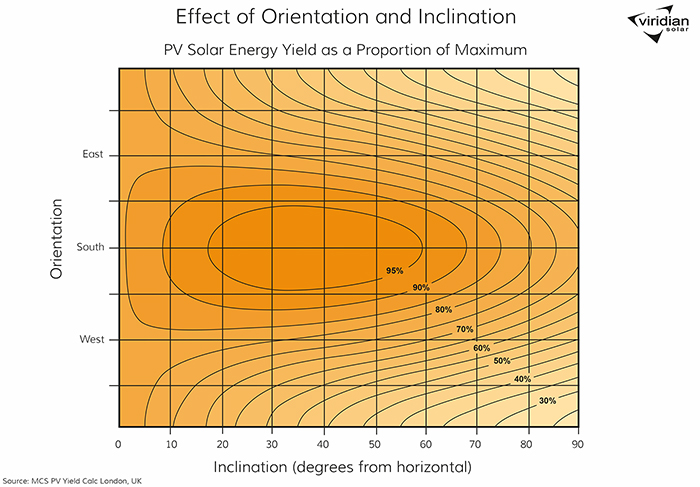 The position that maximises the energy collected by a solar panel in the UK is facing south and tilted at an angle of 35 degrees from the horizontal. As the direction the panel faces moves away from due south, the annual incident energy will fall off. Similarly as the angle of tilt increases towards vertical or decreases towards horizontal the incident energy will also drop.

However, as shown in the graphic, the effect is not that pronouced.

For a typical roof of 35 degrees pitch, it can be seen that panels facing southeast or southwest will recieve 95% of the light energy each year for panels facing due south. Panels facing east and west receive 80%, which can easily be made up with additional panels.

As the cost of solar falls, people are already talking about placing panels on north facing roofs as well as the southerly aspect. At northeast/west a 35 degree roof recieves more than 60% of the light energy of a south facing roof, and a fully north facing roof 55%.

The reason for this? Around half of the light energy through the year in the UK is diffuse (reflected off clouds or ground or landscape), and this light energy is less effected by the orientation of the panel than the light arriving direct from the sun.