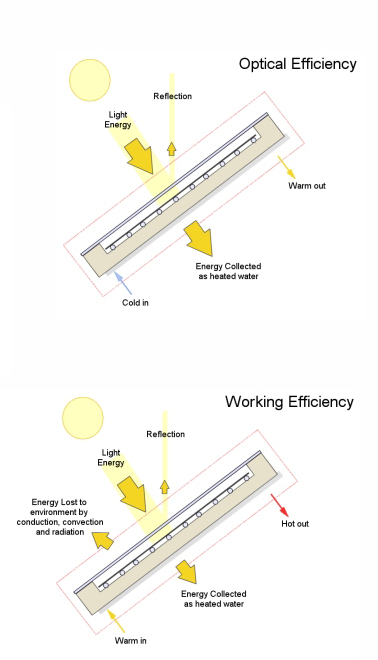 The ratio of the light energy that passes through the transparent cover and is absorbed at the black surface to the light energy landing on the panel gives one measure of the efficiency of the panel, the so called "optical efficiency" or "zero-loss efficiency". As the reflection changes with the angle of incidence of the incoming light, efficiency is measured with the rays striking the panel at a normal angle, where the transmittance is at its peak. The optical efficiency is only affected by the properties of the cover glass and the black surface.

When the liquid flowing in the panel is at the same temperature as the outside world, and the sun is directly overhead the panel, the optical efficiency is the efficiency with which the solar panel will operate. However, this might only be the case for a small part of each day.

As the day progresses, and the temperature of the water in the store is increased, the average temperature inside the solar panel increases too. Since the panel is hotter than its surroundings, heat is lost from the panel by conduction, convection and radiation. The proportion of energy going to heat the water reduces. The hotter the panel gets, the more heat is lost, and the lower is the efficiency. In this mode, the efficiency is also influenced by the insulating properties of the panel. The efficiency of a solar panel will vary depending on the temperature difference between the panel and its surroundings. The graph illustrates this variation for different types of solar panel.

The graph shows the efficiency of solar panels as the average temperature inside the panel increases from ambient at the left hand side. Evacuated tube systems generally start off with lower efficiency than flat plate systems due to the inefficient geometry of packing glass tubes together.

However, as the temperature of the panel increases, the superior insulation of the vacuum is demonstrated and the efficiency decreases more slowly than for flat plate panels.

Evacuated tube systems are best suited to industrial process heat applications, where higher temperatures are required. For domestic hot water applications, much of the available energy is collected at the left hand half of the curve and both types of product perform well. Some suppliers of solar panels misleadingly quote the optical efficiency as if it were the overall efficiency of their product. Some even use the efficiency of the black surface at absorbing light - ignoring the effect of the cover glass. This simplification is extremely misleading. As the grey line shows, it is easy to create a panel with a high optical efficiency, just leave out the glass.