There are two main choices for how to arrange the plumbing in the solar loop, drain-back and pressurised solar systems:

When the pump is not running in a drain-back solar system, all of the liquid is inside the building and the solar panels are empty of fluid. A small tank (the drain-back vessel) holds the liquid so that the resting fill level is above the pump. 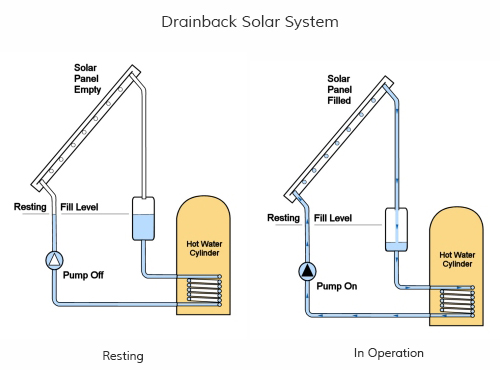 When the pump switches off (for example at night time or if the cylinder reaches its target temperature), the fluid flows backwards under gravity down the solar panel until both sides reach the resting fill level again. This arrangement protects the solar fluid from temperature extremes that can occur overnight in winter and during "stagnation" in summer.

Stagnation is the condition when the pump is switched off during sunny weather (for example because the hot water store is already at its maximum temperature). With no circulation of solar fluid to cool the panel, it gets hotter and hotter. In full sun high performance solar panels will reach an equilibrium point (where heat losses balance with solar energy gain) at an internal temperature greater than 200C.

The advantages of the drain-back solar system are: 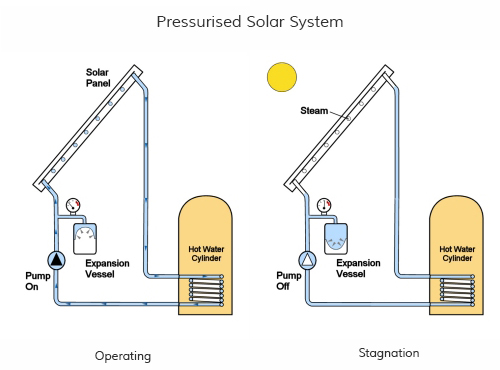 In a pressurised solar system, the solar circuit is completely filled with liquid at all times, including overnight in freezing weather and during periods of stagnation. To prevent burst pipes in the solar panel the circuit is filled with antifreeze solution, around 40% by weight of propylene glycol will protect the solar panels down to -20C.

The volume of the solar fluid will change as its temperature changes, expanding when it heats up and contracting when it cools down. An expansion vessel is fitted to the system to allow for such changes in volume. The expansion vessel is a steel cylinder with a rubber diaphragm across its centre. The solar circuit is attached to one side; the other side of the diaphragm has an inert gas trapped inside. As the volume of the solar loop fluid changes it can push against the diaphragm and compress the gas on the other side. The pressure in the system rises, but only slowly compared to a system without an expansion vessel.

In stagnation the temperature in the panel is high enough to boil the solar fluid. As it changes to steam the fluid undergoes a massive change in volume, so fluid is pushed out of the panel and into the expansion vessel.

During commissioning it is necessary to expel all of the air from the system and charge it up with a solution of antifreeze. This is normally done with a special filling pump that can chase the solar fluid around the system at high velocity and sweep the air out. As a result, commissioning and maintaining a pressurised system is a more complex and time consuming job than for a drain-back system.

The advantage of the pressurised system over the drain-back system is that it is applicable to a wider range of situations. The drain-back pump needs to be installed within a certain height below from the highest point in the system, and the pipes to and from the solar panel need to be installed with a fall to allow drainage. In addition, the volume in the drain-back vessel limits the allowable volume of pipe above it, therefore the length of pipe runs and number of solar panels that can be run from a drain-back vessel of a particular size.

A re-start of the solar pump following stagnation will result in steam being pushed out of the solar panel and down the pipes to the cylinder for both drain-back and pressurised systems. The steam quenches rapidly on the cooler pipe-work, but instantaneous temperatures greater than 200C can be reached, especially near the solar panel inlet and outlet pipes.

The temperatures reached in stagnation mean that the solar pipe-work needs to be robust in the face of steam at elevated pressures. Certain types of insulation solder and pipe materials need to be avoided in solar plumbing circuits: