Since their invention, solar cell efficiencies have been steadily climbing towards the theoretical maximum. The diagram shows how the world record for cell efficiency has changed since 1975. 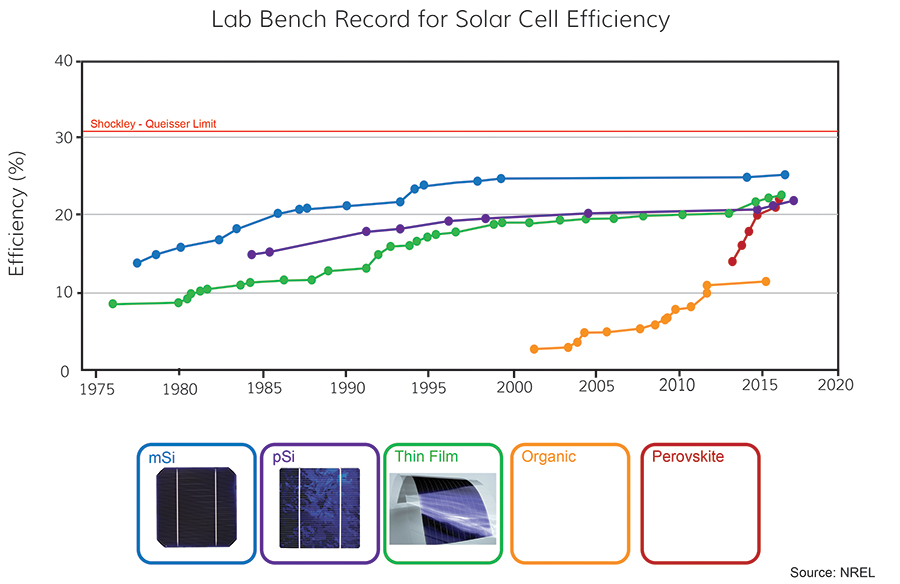 The most efficient single layer cells are currently monocrystalline silicon (mSi). Both mono crystalline and poly crystalline types of cell are made by slicing a block of silicon into thin wafers, then diffusing doping materials into the surface to create a p-n junction.

Another method of manufacturing a PV cell is by depositing a thin layer of photovoltaic material onto a substrate such as plastic, metal or glass. The efficiency of these thin film PV cells has generally been lower than that for crystalline silicon, but in recent years has closed the gap with poly-Silicon, at least in the laboratory.

Organic PV cells are a relatively new technology where polymer materials can generate electricity from light. Although efficiencies are currently very low, the promise of low-cost plastic manufacturing methods makes Organic PV an area to watch.

Perovskite cells are also another technology to watch judging by the rapid increases in efficiency since their discovery in 2009. These are made of a compound with a perovskite crystal structure, often a hybrid of lead or tin halide. The very low potential production costs for these cells hold out great promise, as does the idea of combining a perovskite coating with a conventional silicon cell.

It should be borne in mind that the efficiencies shown in the diagram are for solar cells made in tiny quantities in leading research laboratories world-wide, no account is taken of the cost of these demonstration materials. Cells available in commercial quantities trail some way behind. Currently, the higher range of performance for PERC mSi cells in production is around 22%. There are currently no Perovskite cells in production.