PV Sizing and Self Consumption

4.7 Sizing and Self Consumption

The graph shows an day of electricity use and generation for a real household with a 4kWp system for a February weekend day (when people are more likely to be at home during the daytime). It covers a 24 hour period and is a sunny day. Solar generation is either used in the building (orange) - known as self-consumption, or exported to the grid (yellow), with each bar representing a ten minute period. Electricity bought in from the grid is shown in dark blue.

Solar generation peaks at nearly 500Wh per ten minutes, which is equivalent to a continuous power output of 3kW, which is not bad for a 4kWp system operating with low sun angles of winter. It can be seen that from around 09:30 to 16:00 the solar PV is almost completely covering the electricity demand of the house. However, there are small amounts of import from the grid during this time. This could be because a very high power use happened for a short time and exceeded the power output of the solar, for example kettle and stove simultaneously. 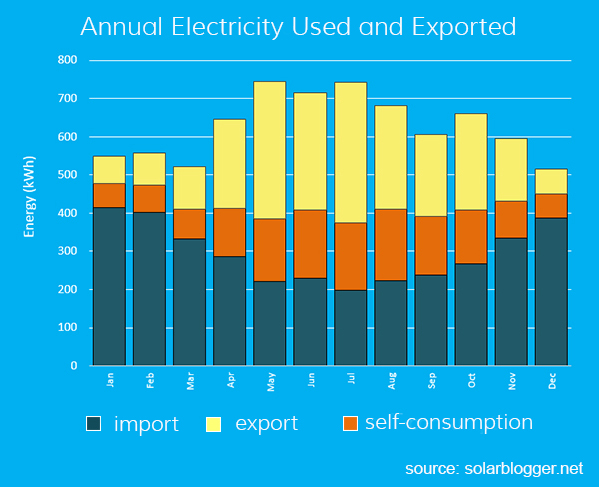 The smaller the PV installation, the lower the energy generated, but the higher a proportion of the energy generated that will be used in the building rather than exported to the grid. Typically sized (2.5-4kWp) domestic installations struggle to exceed 40% of self-consumption - more details here. However the addition of battery energy storage or power diversion to heat water will change this significantly.

The graph shows the solar energy exported, used on site and energy imported from the grid over the course of a yearfor a domestic property. The seasonal energy profile of solar generation is evident in increase in generation in the summer months. Also evident is the increase in electricity consumption in the winter time, where less time is spent outdoors and lighting is needed for more hours each day. Every unit of electricity generated by the solar installation displaces the use of carbon fuel somewhere. Depending on the commercial arrangement between the PV installation owner and the electricity supplier, payments may be made for units exported, as well as savings made by energy imports avoided. Generally, the value of export is lower than the savings from using the energy yourself, making battery storage and electric vehicles highly complementary technologies to solar.